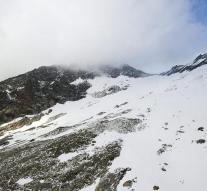 brig - A German hiker has been found thirty years after his death in a Swiss glacier, reports the French newspaper Le Parisien Wednesday. The German tourist disappeared in the summer of 1987.

The recovered remains of the backpacker were partially locked up in a glacier, said the canton of Wales. The human remains were discovered by two mountain climbers on July 25th. They had started climbing the Lagginhorn (4010 meters). Arrived at a 3499 meter high altitude called Lagginjoch, they decided to return because of the bad weather.

On the way back they discovered 'one hand and two shoes', according to the police. These remains were near a cableway station. Due to the bad weather, it was not possible to investigate immediately. One day later, the remains could be stored. The victim could then be identified as a German born in 1943 which disappeared on August 1, 1987.

In mid-July a mummified couple was found in a glacier in southern Switzerland. The man and woman disappeared 75 years ago during a walk.