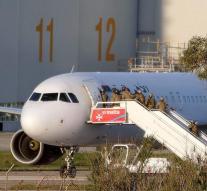 valleta - The shooting of a film about a plane hijacking at the airport in Malta Friday afternoon had suddenly interrupted because there was underway a real hijacking.

The film, titled 'Entebbe', is about an airplane hijacking 40 years ago in Uganda. When Israeli soldiers freed hostages from a hijacked Air France unit at the airport of Entebbe. The eight kidnappers twenty Ugandan soldiers were slain. Also, three hostages and one Israeli soldier were killed. The hijacking of the Israeli unit had already lasted a week.

The recordings were immediately put stop when it became clear that the device of Afriqiyah Airways was hijacked, the BBC reports. Which incidentally hijacking ended a lot less violent: the hostage-takers surrendered eventually.

The film Entebbe, Rosamund Pike, Vincent Cassel and Daniel Bruhl in the lead roles, should be released next year.