Home / World / Highest number of HIV infections in Europe ever 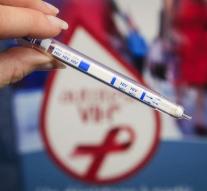 copenhagen - The number of HIV infections in Europe since the beginning of tracking such figures never as high as in 2015. More than 153,000 people in 1980 became infected last year, compared to a growth of 7 percent over the previous year. Hence are now more than 2 million people infected with the AIDS virus in Europe, the World Health Organization on Tuesday announced.

Especially seen in the Eastern European countries is a substantial increase. The number of HIV infections in countries such as Russia, Bulgaria, Hungary, Czech Republic and Slovakia rose by nearly 80 percent to more than 121. 000. Apart from unsafe sex, the virus is there too often transmitted by contaminated drug needles.

Netherlands had last year about 23 000 people living with HIV was already known. That is about 900 more than in 2014.