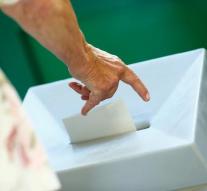 dusseldorf - Sunday seems to be more people voting in the elections to the parliament of the German state of North Rhine-Westphalia (NRW) than five years ago. According to the authorities at midday, the rise was 34 percent, with 29 percent in 2012.

In the polling contest, the ruling Social Democratic SPD and the Christian Democratic CDU take the lead. The vote in NRW is an important measure for the election of the national parliament in September.

The region is the most economically strongest of the Federal Republic. The North Rhine-Westphalia bordering on the Netherlands is slightly smaller than our country and has more and more people with almost 18 million people. Over thirteen million have voting rights. The polling stations close at 18.00 hours. The first forecast of the results is expected half an hour later.