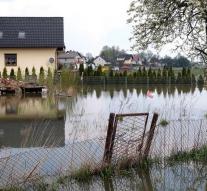 bratislava - Parts of Poland, Slovakia and the Czech Republic were hit on Saturday by Friday by heavy flooding and emergency weather. Streets and cellars were underneath. Beekeeping changed into crowding water masses. As a result, three deaths fell in Slovakia.

In Ochodnica, in the north of Slovakia, a terrain car came into a brook. The two occupants could leave the vehicle on their own, but were then taken away by the wild water. One of the men eventually managed to cling to a floating tree. He could be rescued by the fire brigade, the other man was found dead a few hours later.

On Friday night a 56-year-old man was already dead in a brook found in the village of Hvozdnica. Presumably, he was enthralled by the fast-flowing water. On Saturday, despite the warnings, a group of canoeers waited on the highly-grown river Vah, a tributary of the Danube. A 45-year-old man fell out of the boat. He was taken out of the water by the fire brigade, but resuscitation failed.