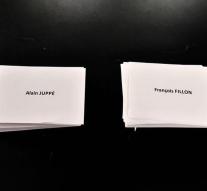 - Interest in the election of a center-right leader in France, in the run-up to the presidential election next year, is great. Sundays are noon 10 to 15 percent more votes cast than a week ago, French media reported.

When the turnout was higher than expected. Almost expressed the four million French whose center-right party Les Républicains should be leading, or who do not. Ex-President Nicolas Sarkozy received surprisingly few votes and immediately stepped out of politics.

Ex-Prime Minister Francois Fillon initially appeared in polls to have no chance, but won a week ago surprising 44 percent of the vote. He defeated as too broad his rival on Sunday (November 27), former Prime Minister Alain Juppé.