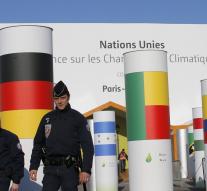 - The security around the UN climate summit, which begins Monday north of Paris, is extremely strict. On site at Le Bourget where the conference is held in 2800 police officers will be deployed. Controls at borders, airports and ports is done by 8 000 police officers. That the French Interior Minister Bernard Cazeneuve said.

At present, 120 000 policemen across France for the safety of the residents, said Cazeneuve.

At the climate summit are 147 heads of state and government expected. There will be twelve days talked about reducing greenhouse gas emissions and reduce global warming.