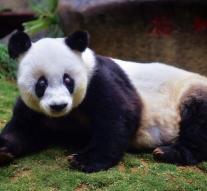 fuzhou - The oldest panda who lived in captivity died at the age of 37. The elderly Basi suffered from multiple conditions in China according to Xinhua State Press Office.

Doctors have been trying to extend the life of Basi, who eventually died in a specialized research center in Fuzhou City. The animal was human to more than one hundred years old. It gave her the nickname 'Oma Basi'.

'The body of Basi will be transferred to the Basi Museum,' said the director of the center. 'This is being built so that people will remember her forever in the spirit of harmonious development of man and nature. '

Basi loved cycling, basketball and weightlifting. She survived several serious diseases. According to Xinhua, she thanked her permanent caregiver, who died last year at the age of 44. The woman had been compassionate about Basi for 27 years.

Wild pandas are on average about fifteen years old, though they often live in captivity for a long time. Basi has been living in Fuzhou city center since her youth. She was saved from a river by villagers in Sichuan province at the age of four.