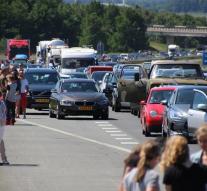 the hague - The second 'black saturday' is coming. Especially in France, Germany and Italy, it is busy on the roads, the ANWB predicts.

In France, motorists find themselves in both directions. The busiest is the highway A7 between Lyon and Orange. In Germany, the files are mainly expected around Karlsruhe, due to work on the A5 motorway. It is also busy on the A8 between Salzburg and Munich and the A3 between Frankfurt and Nuremberg. In northern Germany, returning holidaymakers travel to Scandinavia for traffic jams.

Also in other holiday countries, the likelihood of files is high. The waiting time for the Gotthard tunnel in Switzerland and the Karawankentunnel in Austria will last for more than two hours, reports the Traffic Information Service. In Italy this weekend is the busiest of the year. Millions of people go on holiday.

In the Netherlands, files on the way to Schiphol and at a number of major events, such as the Canal Parade in Amsterdam, the annual flower market in Deventer and the corso in Westland.