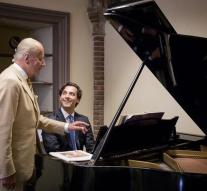 'If all the Moroccans were mixing with Dutch women, nothing else is going on. Then you do not need integration clubs and experts. Integration under the sheets, that's beautiful? ', Said Hiddema at the radio program The Overnight.

According to Hiddema, there is 'one category of people' who do not 'let' free, and that is Islam. '

His party leader Thierry Baudet seemed to suggest the opposite: he warned, in his words, 'homeopathic dilution of society'. We mix the Dutch people with other peoples, so Baudet said, so that there would never be any 'Dutchman'.

Hiddema about Baudet's statements: 'I voted for the sexual intercourse. Now I'm able to book as someone who is against racial blending, more strongly: we are racists. 'He speaks of penguin and parrot behavior by journalists. 'They all march all the same way. '

There was much criticism of Baudet. His statements would be racist. Hiddema also threw that to his feet. 'I advocated the sexual intercourse. Is that racist? I do not think so. On the contrary. '