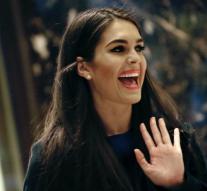 washington - Hope Hicks is going to temporarily get started as the main communication of the White House. A government employee told The New York Times that 28-year-old Hicks president Donald Trump helps to search for a person who will perform the job for a long time.

Hicks has been working for the president for some time now. She acts as a Trump confidant and also has a close relationship with his daughter Ivanka and his son-in-law Jared Kushner. During the 2016 election campaign, Hicks was spokesman for Trump.

The office of communications director of the White House has been vacant since Anthony Scaramucci's departure at the end of July. He has been in service for only ten days. During that period, spokesman Sean Spicer and then staff manager Reince Priebus left. The last was burned by Scaramucci in interviews with CNN and The New Yorker. Who suggested that Priebus leaked information to the media and drove him away as a paranoid schizophrenic.