Home / World / heyitslindac - PHOTOS : Housewife is going to destroy IS 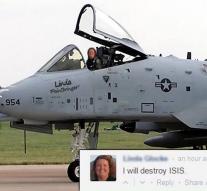 - "I am going to destroy Isis," Linda Clarke wrote a few weeks back on Facebook. By that brief sentence this American housewife has become an internet legend.

And Linda enjoying themselves rather her hero status. Twitter retweet she eagerly Photoshopped pictures of themselves. Although it looks a hero her sometimes to rise to the head...

I'm running for president in 2020. Watch out Obama, Kanye, and Trump.

However, Linda does have its priorities straight.

I can deal with ISIS later, but first I need to destroy this toilet.