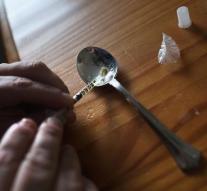 - The heroin epidemic in the United States always takes extreme forms. The number of deaths from overdoses continues to increase and drug fighters signaling a new trend: the extremely addictive drug is cut in some places with carfentanil. This painkiller is 10,000 times more potent than morphine. Two milligrams of this stuff is already enough to sail an African elephant.

This past year, the number of heroin deaths rose alarmingly. Particularly in the states of Ohio, Indiana and Florida, the number of overdose fatalities. The drug, which fell out of favor in the seventies and in the nineties came to the Netherlands, since 2014 again in demand in the US

In the city of Cincinnati (Ohio), the number of overdoses during last week explosively from 25 to 90. 'We do not know for sure, but we suspect that a consignment of heroin with carfentanil goes through the city,' said Tom Synan Heroin Task Force against CNN. In neighboring Indiana, the number of cases significantly. Detectives investigate whether there is a connection. Earlier this month, a party carfentanil intercepted in Florida. The catch coincided with an increase in the number of doses.


According to the drug hunters DEA landed Chinese heroin from Mexico into the United States. The drug is to arrive cheap and easy.