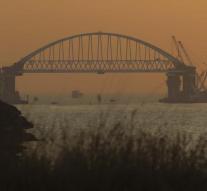 hertfordshire - A schoolboy made a heroism by jumping a man who wanted to jump with a rope around his neck.

The boy walked by. 'Do not do this, I'm young,' he shouted, clinging the man. That stated Joanne Stammers (47) who approached and helped. Her performance is also heroic; She has a disease that causes them to get bloodshed quickly, and so she also runs a risk.

'It seemed to last forever,' says Stammers against the Mirror. 'But that little boy, he's the real hero. Children of that age would normally go through, but he got it in his small head to stop him, with all his weight in the fight. '

Later also helped a second boy. The man did not want to live anymore, cried and shouted, 'Let me go,' in response to the supplication, his attempts to stop. 'The more he moved, the tighter the rope,' said Stammers.

In the end, she was helped by intelligent police and fire services. How the suicidal man is doing is not known. Joanne Stammers takes care of the little boy: 'I keep thinking he needs help because he had someone's life in his hands. If he let go, the man would die. '