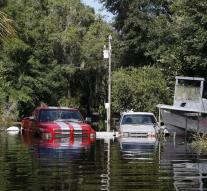 - 'Hermine', which Friday as hurricane of category 1 in Florida came ashore and then weakened to tropical storm, still has considerable havoc in the state. Everywhere streets are under water or are full of rubbish and tens of thousands of people without power. According to the mayor of Tallahassee has half the city, or about 100,000 people without electricity. It may take several days before the issues are resolved.

Although the dreaded catastrophe was forthcoming, the danger is far from over. Experts predict weather for the long weekend- Monday is the 'Labor Day' and celebrated the end of summer- even large amounts of rain, strong winds, high waves and flooding. Moreover, the risk that there are locally tornadoes arise increased significantly. Gov. Rick Scott had been in 51 of the 67 districts of Florida declared a state of emergency. Nearly all public buildings and a lot of schools remained closed Friday.

Also elsewhere Hermine, now also Georgia has achieved and is heading for South- and North Carolina, for a lot of inconvenience and worry wreak havoc on soybean and cotton fields. Meteorologists keep in mind that even New York and New Jersey will suffer from the storm.


The last time Florida was hit by a hurricane 'Wilma' in 2005. Then came five people dead.