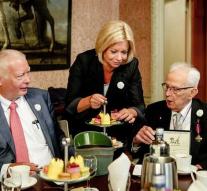 the hague - All Dutch soldiers who work for the preservation of our freedoms deserve gratitude. That's what minister Jeanine Hennis said on Saturday in honor of Veteran's Day. Some ministers from different generations knew the minister a medal.

In a speech in the Ridderzaal, where among others, Prime Minister Mark Rutte and King Willem-Alexander were present, Hennis emphasized that freedom is not self-evident. 'Who lives in freedom has the responsibility to maintain that. And so we have to deal decently with our freedom. ''

As someone who understood it was Ted Meines, Hennis said about the former deceased general and former resistance warrior who was one of the founders of the Veterans Platform in 1989. 'This is the first Veterans Day without Ted Meines, the' Father of Veterans ',' said Hennis. 'He is missed, but it goes without saying that his involvement, dedication and thought remain. ''

A number of people were named and distinguished by Hennis. Like Navy Sergeant Major Rob Severs, who was sent to Afghanistan in 2009 and lost a leg. 'This ultimate test did not turn you off. On the contrary, 'said Hennis. Severs will soon receive from Rutte the award that belongs to the title of Officer in the Order of Orange-Nassau with the swords.

To Christian Peterse, who reported as a volunteer in 1959 to go to New Guinea, Hennis recognized the New Guinea Memorial Cross. The father of Peterse, who died in 1943 as a prisoner of war on the island of Flores, was distinguished posthumously, with the Mobilization War Cross.