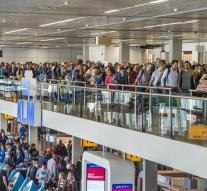 the hague - Schiphol immediately gains additional strengthening of various government departments to prevent chaos as in May during the busy summer period.

That says State Secretary Dijksma (Infrastructure) in an interview with The Telegraaf that appears on Saturday. 'We put everything on everything to prevent repetition. '

For example, the airport receives assistance from fifty people from the Legal Services Department, the organization that normally engages in baiting customers. Defense will use military force components in vehicle controls at the border and in ports. The marechaussees at these locations can therefore switch to Schiphol.

'It remains busy. People will also have to wait, but you do not really have to get a day in advance if you want a flight, 'says Dijksma. The top pressure on Schiphol in the summer season is, according to the Secretary of State, the highest priority in the cabinet.

Last week, the ministerial council agreed that several government officials went to see if they could contribute to preventing a new passenger infarct at the national airport. Although VVD and PvdA are currently raising the 2018 budget to be determined on Prince's Day, they agreed that the image of the Netherlands would be damaged if the weather is getting out of hand.

In recent months there was a flood of criticism from travelers who sometimes even missed their flight by the long-awaited wait. Photos and videos of giant queues went through social media across the world.

State Secretary Dijksma has twice with the topmen of Schiphol and KLM spoken to the ministry to take extra measures.

For example, during these summit meetings, additional lanes were opened at customs and three to four hundred additional security people were deployed. The cabinet has had to turn around in all sorts of bends to enable extra marechaussees. The military police have overloaded terrorist threats and mass immigration in recent years with additional work.

For example, men and women are on guard at the Lower House and patrol with armored jeeps along important buildings in the big cities. In order to guide the migration flows and prevent the illegal crossing to Britain, additional manpower was required in ports and at border controls.