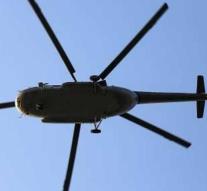 newport beach - Three people died when a helicopter crashed in a residential area on Newport Beach in California. According to the police, four people were on board the helicopter. Two people were also injured in the accident. Nothing is known yet about the condition of the wounded.

The helicopter had just taken off at the John Wayne Airport, not far from Newport Beach.