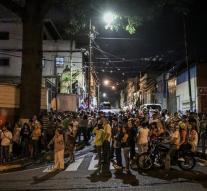 caracas - A man ran an attack with a helicopter on Tuesday, directed against Venezuela's government. From the stolen police helicopter, grenades were thrown onto the building of the Supreme Court in Caracas. Nobody got injured, as far as known.

From the helicopter, the Ministry of the Interior was also taken to fire, where at that moment a group of people were gathered. According to President Nicolás Maduro, tens of deaths could have fallen.

The government is responsible for the attack by police chief Oscar Perez. Perez is opposed to the criminal government in his eyes. On his Instagram account, Perez had placed a video of himself with a number of armed men on his hood. In the video, they say that an operation is going to restore democracy.

Maduro speaks on the state television of a 'terrorist attack' and relates to a coup attempt. He announces that special security forces are behind the perpetrators. The president also demands that the opposition parties condemn the attack.

The opposition sees the Supreme Court as an extension of the president. The court wanted to take over parliament's duties earlier this year, because the judiciary's public representation is badly co-operating and rules are on its way.

Parliament is dominated by opponents of the president. On Maduro's demand, the supreme court of law returned to his decision.

The president warned earlier on Tuesday for war if his opposition to socialist government is overthrown by protesters. The demonstrators have been on the streets for three months to protest against his rule.