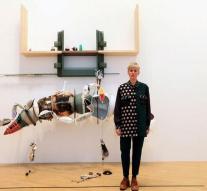 london - Artist Helen Marten won the prestigious Turner Prize in 2016. The art prize in which a sum of £ 25,000 it is going to Marten involved in her sculptures from found objects. The British wanted to create 'poetic visual puzzles' for his.

That made the BBC Monday released.

At the Turner Prize are chosen beforehand four artists, who then can exhibit their work. Based on the exhibition will be eventually chosen the winner.

The 31-year-old Marten won last month another major art prize, the Hepworth Prize. 30. 000 pounds that she will share earned thereby with the other four nominees. 'Nowadays it is flawed hierarchical placement of art in art competitions,' Marten argued her remarkable action.