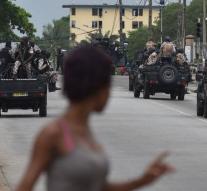 abidjan - In the two largest cities of Côte d'Ivoire, Abidjan and Bouaké, violent firefights broke out Monday, witnesses reported. It involved an army campaign aimed at ending a rewarding soldier's four-day misery for the payment of premiums.

'There is a military operation going to restore order,' said the office of staff manager Sekou Touré in an email. In the statement, the insurgent soldiers were called 'returning to their barracks and laying down the weapons'.

Loyal government troops rose on Sunday to Bouaké, the center of the riot. In the nightly hours, it was shot occasionally as well as at military complexes in Abidjan. Just before sunrise, the shootings increased in number and intensity. Also in Daloa, a major hub for cocoa trade, was fought.

'I heard the sounds of Kalashnikovs and a heavier weapon. Very violent, 'said a resident of Abidjan, who lives near the presidential palace and the US Embassy.

There is little known about any victims. According to Touré, units have shot civilians and injured an unknown number. The people had gone up the street to make it clear that they were sitting on the reign of soldiers.