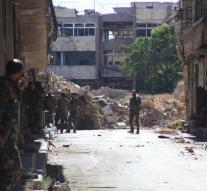 - In the north and center of the Syrian city of Aleppo Friday was heavy fighting between government troops and rebels. Government forces continued this week a ground offensive to retake parts of the city controlled by insurgents. The rebellious part, where more than 250,000 people live, is then bombarded from the air by Russian fighter planes.

The Syrian Observatory for Human Rights reported heavy shelling in the district of Suleiman al-Halabi. The front would ' and fro 'go. In a bombing a water pumping station was destroyed, so the water was even more limited in the district.