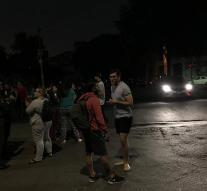 - Mexico was hit by a heavy earthquake on Friday morning.

According to seismologists, shocks with a maximum strength of 8. 1 are on Richter's scale.

The epicenter would be near the densely populated capital of Mexico City. American media report that panic broke out and people from their homes flew the street.

MORE ON THIS LATER