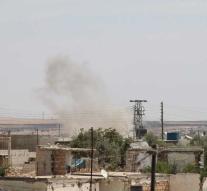 damascus - Together with ally Russia, Syria carried out heavy air raids on Saturday in the province of Idlib. This is considered the last large enclave still in the hands of insurgents against President Bashar al-Assad. The Observatory for Human Rights reported that at least four people were killed.

Many fighters in Idlib belong to jihadist groups. However, there are also millions of citizens in the area bordering on Turkey. That country already catches some 3.5 million displaced Syrians and fears a new refugee flow.

Turkey tried to persuade Russia and Iran, two allies of Syria, to form a truce for Idlib on Friday. Moscow and Tehran, however, made it clear that they do not feel anything for it. President Vladimir Putin said that Damascus has the right to control its 'complete national territory. '