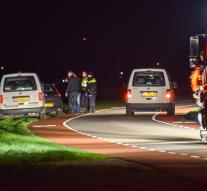 - A 46-year-old man after a shooting Wednesday transferred into Benningbroek with heart problems to the hospital. The man from the municipality Opmeer was found lying in the street by police after mention was made of shots at the Garden Street.


He appeared to have no injuries but probably have heart problems. He had to be resuscitated.
The man's car is probably shelled. The vehicle was in places damage. The cause is unclear. The man has no statement to make yet. Police are asking witnesses to come forward.
NEW