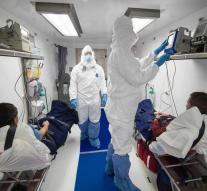 berlin - Health ministers of the G20 have been practicing in Berlin two days on scenarios for damaging international outbreaks of infectious diseases. 'In recent years we have been dealing with the international spread of ebola and zika. And somewhere in the future we will be faced with new outbreaks, 'said Secretary of State Martin van Rijn after the conclusion of the meeting.

Van Rijn participated as deputy minister of minister Edith Schippers, who is busy as an informant with the smithing of a new cabinet. The other participants were ministers from nineteen influential countries, plus the European Union. It was the first time they had such an exercise together. The Ministers of Health have agreed to do this more often to be well prepared.

Another important topic was to counteract antibiotic resistance. Bacteria can be resistant to these agents because of the excessive use of antibiotics. In the EU alone, thousands of people die annually. The participants spoke 'to keep working intensively', but big decisions did not happen.