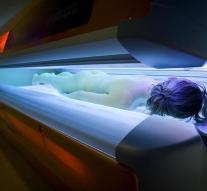 brussels - An important body in Belgium advocates a ban on tanning salons. A total ban could prevent nearly 6000 deaths in fifty years and save more than 200 million euros in medical costs.

The High Health Council on Monday refers in particular to the fact that exposure to ultraviolet radiation can cause skin cancer and eye diseases. Most users are lying under a tanning bed for purely aesthetic reasons, according to the board.

In addition, widespread availability invites to 'repeated and excessive use', and sometimes even addiction. Controls have shown that few sunbeds are in order and provide accurate information.

In 2015, 14 percent of the Belgian population used a solarium. That is relatively much compared to other European countries.