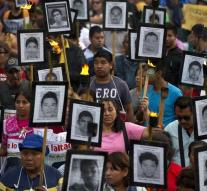 mexico - On a square in a town in Mexico have found six heads. The heads were discovered in Juiquilpan about 500 kilometers west of Mexico City.

It is not who the heads clear. No bodies have been discovered, according to local media Sunday. Not far from the city were beginning this month already found two heads.

In the area two criminal gangs vying for control of the drug trade.