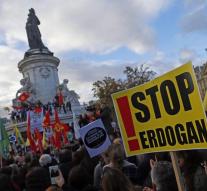 ankara - The pro-Kurdish HDP puts down her work in the Turkish Parliament. A spokesman for the party said Sunday against the newspaper Hurriyet that this decision was taken following the arrest of a number of MPs.

The spokesman said that the parliamentarians will be in default at meetings of the full parliament and parliamentary committees.

Late last week, the Turkish police arrested the two chairmen of the HDP and some parliamentarians of the party. HDP would maintain ties with the Kurdish PKK. Which is by the Turkish government, the United States and Europe as a terrorist organization. HDP is the third largest party in the Turkish parliament with 59 of 550 seats.