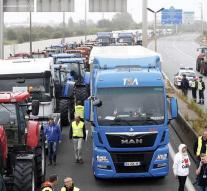 strasbourg - Intimidating and threatening truckers at Calais migrants who want to ride to England, must finally be addressed. MEPs, also from the Netherlands, called Tuesday in Strasbourg to action.

The problems have been playing longer, but take still continuing. ' A nightmare '' for the truckers, migrants and residents of Calais, he said. France wants the 'jungle', as the migrant camp in Calais is called, still clear this year.

EU Commissioner Violeta Bulc (Transport) said to share the frustration of parliament. She noted that the European Commission has no power to prevent migrants crawl into trucks and argued that the French and the British have already taken steps in the past year.

MEP Peter van Daalen (Christian Union) called quickly to organize a summit to find a solution. His Labour colleague Agnes Jongerius pleaded for truckers who find the ride too dangerous not to be punished if they refuse. ' We must ensure that as long as their safety is at stake, drivers on other routes may drive the UK. Without their bosses they can appeal it. ''

Dennis de Jong (SP) found that drivers should not drive at risk. ' A hazard allowance is the least. '' Wim van de Camp of the CDA is also ready with the threats. Idiot ' that France and the EU will not solve this. ''

Trade union CNV Professionals want truckers who drive to Calais, get a risk surcharge of 50 euros per trip. CNV set this for the negotiations on a new collective agreement for the carriage of goods, which begin on 26 October. ' One ride is not the other. If you drive to Calais, you are in a sort of war zone. It's really no fun, it's okay what are facing, '' said CNV negotiator Tjitze of Lille.