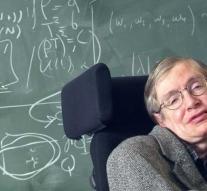 cambridge - Physicist Stephen Hawking wrote a scientific article just before his death. That is now posthumously published in the journal Journal of High Energy Physics. The article was approved for publication shortly before his death. Hawking died on March 14 at the age of 76.

Hawking wrote the article together with the Belgian physicist Thomas Hertog, professor at the Katholieke Universiteit Leuven. They suggest that the universe is finite and much simpler than previously thought. The theory was shared with the world for the first time last year. Hawking and his pupil Duke have worked it out afterwards. Because it is a theory, the undeniable proof has yet to be delivered.

The universe originated almost 14 billion years ago with the Big Bang. The big question is what exactly happened since then. All natural laws have been found and generally accepted theories have been worked out, but physicists are still looking for the great theory behind them, the basis of everything, an explanation for both the very large (the universe) and the very small (minute particles). One of the theories is that the universe actually consists of an infinite collection of mini-universes. That is called a multiverse. We would live in one of those universes. The problem is that the number of possible laws of nature may then also be infinite.

That theory is not right, Hawking and Duke say. They write: 'We state that the universe is fairly even and also finite. 'That does not mean that there is' a single, unique universe, but we do suggest that the number of possible universes is much smaller. 'Whatever can be found outside their finite universe, let them be in the middle.

Hawking was one of the most famous scientists of the past decades. He had been suffering from ALS, a deadly and incurable disease to the nerves that control muscles. Most patients only have a few more years to live after the diagnosis. Hawking lived with the disease for more than fifty years. He was confined to a wheelchair and could only talk via a computer. Hawking chose the words with a cheek muscle and the computer pronounced it with a distinctive robotic voice.