Home / World / Hashtag has been on social media for ten years 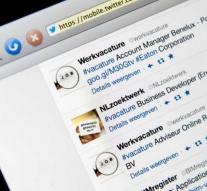 amsterdam - It's Wednesday just ten years ago that the hashtag was introduced to social media. The fence # followed by a word or letter combination creates order on social media like Twitter and Instagram and indicates that a message matches a particular topic that is trending or not.

The hashtag is nowhere to think of social media. 'As soon as you open Facebook, Instagram or Twitter, the hashtags fly your ears,' says Randy van Essen of T-Mobile. 'The hashtag has become part of the online language we speak globally. '

The inventor of the use of the hashtag on social media is US computer programmer Chris Messina. He introduced his idea on August 23, 2007 with a tweet. 'What would you like to use # (fence) for groups?' He wrote. In October of that year, the hashtag became commonplace when the American Nate Ritter twittered over a thousand messages about the forest fires in California under the hashtag #sandiegofire.

Instagram implemented the hashtags in January 2011. This makes searching on the photonwork a lot easier. For example, photos of dishes are often associated with the hashtag #foodporn, which has been used 132 million times for this purpose. In 2013, the hashtags also moved to Facebook, although status updates are often not public and visible to the circle of friends.