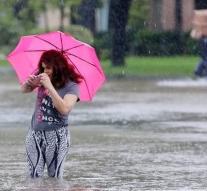 houston - Harvey, formerly a tropical storm, is toned and is now a tropical depression, according to the American National Hurricane Center (NHC). However, the problems are not over yet.

The first flight, since hurricane Harvey disturbed daily life in the state of Texas, has left Houston. The Houston airport was closed due to storm damage and floods. Also, the port of Houston may open again soon, said Mayor Sylvester Turner.

The schedule on the airport's website shows that more flights leave the coming hours, but a large part has still been canceled.

'The situation in Texas is still catastrophic and life threatening,' according to the NHC, saying that it no longer rains continuously in the area.