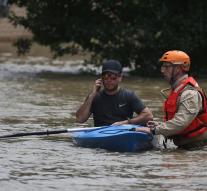 houston - Texas may need more than $ 125 billion (US $ 105 billion) from the US government to re-emerge after Harvey. That said Governor Greg Abbott on a press conference on Wednesday. The tropical storm set a ravage in the southern state, mainly due to the unprecedented amount of rain.

According to Abbott, Harvey has an even greater impact than hurricane Katrina, who housed in New Orleans in 2005.

The government then came 125 billion over the reconstruction bridge. Given the size of the damage in Houston and far away, Abbott thinks that much more will be needed.

The Federal Agency for Emergency Aid (FEMA) has now committed 37 million for first aid to victims and over five million meals.

The governor told us that over 32,000 Texans who had to leave the house and fire were in the shelters. The help of the Mexican government, which has offered to supply boats, vehicles and food, has been accepted in thanks.