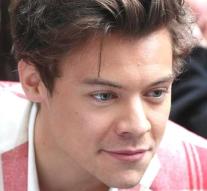 - Daily Mail reports show that Harry Styles donated more than $ 42,000 to the Time's Up Legal Assistance Fund at the end of August

The amount earned Styles mainly with ticket sales and merchandise around his performances in Los Angeles as the last performance of his world tour.

Time's Up is just one of sixty charities and foundations that the former One Direction star donates to in the framework of his campaign Treat People With Kindness. In total, he spent 1.2 million dollars.

Yet Styles is one of the few men who donates such a large amount to Time's Up. Steven Spielberg, among others, donated a sum of 2 million from his foundation Wunderkinder Foundation with his wife. Mark Wahlberg donated 1.5 million after the discussion about his proceeds for re-recordings for All the Money in the World- Kevin Spacey was cut out of the film after allegations were made against him, which meant that a number of scenes had to be re-run. Star Wars director J. J. Abrams donated a million dollars. Film producer Jeffrey Katzenberg donated $ 250,000 with his wife and John Legend donated $ 200,000 with Chrissy Teigen. Justin Timberlake donated $ 25. 000 with Jessica Biel.

On the other hand, there is a whole list of women. From them came the largest donations from Meryl Streep, Reese Witherspoon and Jennifer Aniston, who all donated half a million and Taylor Swift and Oprah Winfrey who each gave a ton. Legal assistance is paid from the fund to victims of sexual abuse in the workplace.