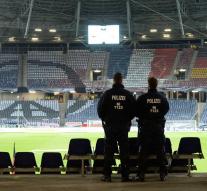 hannover - The German police did a search of Hanover with a man who is suspected of working with others to have planned an attack on friendly match Germany- Netherlands. No arrests were made, according to a spokesman for the Prosecutor's Office in the capital of Lower Saxony.

The spokesman would not comment on the identity of the man. It is also not known whether anything was seized.

It is still unclear how concrete were the plans for an attack on the football match on 17 November. However, the German police took no chances and ordered off the game.