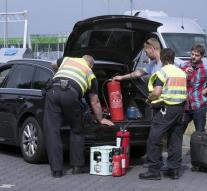 Rushed motorists complain sometimes, but the majority of 'transit passengers' undergo the check in warm weather. A young woman from a bus asks herself in Bunde at Nieuweschans: 'What do they want now? Buses are apparently more frequently checked. 'The loss of time comes with our neighbors have organized it tightly. 'Well, soon they are. 'Student Psychology Frederic Blindow says:' They kindly ask for your passport and the purpose of the trip. It was soon okay. Nice, because I'm on my way home. '

Outbound Klaas Wit from Raststätte Bunde-rij hopes the best of it. 'It's a bit less busy with me now. You see that these people in the chaos are so busy with their inspection fifty meters away that they are passing by. Well, it does not matter so much, most are allowed to see. They mainly put foreigners along the side. '

A Finnish family did not expect it. 'With us, you do not have it between the northern countries anymore. Do not you? We saw what stood and thought, 'says father Miika (42). 'But indeed; The G20 of course. 'They are allowed to go without a proper check. 'Nice! Up to vacation. '

The control at Bad Bentheim is less intense in hundreds of cars. More cars may pass through with a passport check or just a critical look, but who stops will get a firm inspection. Rear seats are folded up, even though they are still tight. The detective dog raises the muzzle in various cars. A camper also gets a visit from the four-legged but only takes a bottle of champagne. 'Nice for us!' Jokes the dog guides.

The car in which David Dybek travels is quiet for a few minutes in the parking lot. 'We work in the Netherlands and travel back to Germany every day. It will take a while? 'It seems that the actions are still going on for days to come. 'Well, bye again!', Says the young pole. Another Dutch car is also in turn. 'Look, here's my passport', Pamels shows the whistle of German and Dutch agents, who asks a few questions. He and his comrades have nothing to hide, is the friendly judgment. 'I'm not worried either. '

Police spokesman Daniel Hunfeld of Bad Bentheim tells on location that was prepared from June 12th. The Dutch and German police usually work together cross-border, this time again. The KMAR is present with a large truck. Hunfeld: 'The peak of the controls is probably Friday and Saturday. 'He looks at the many vehicles. 'The controls are more selective along this busy route. It's so busy here in the afternoon too. We'll see what's going on in the coming days, what we experience, to see how it goes on. So far we have not returned anybody. It's really about what we find in the cars. Demonstrating in Hamburg is not forbidden. '