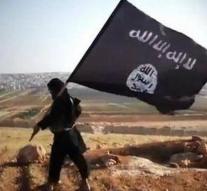 hamburg - The man who attacked a supermarket in Hamburg on Friday with a large kitchen knife was in possession of a small flag of Islamic State. It was found in the suspect's room in a refugee shelter. According to the newspaper Bild hing, the flag of 10 by 15 centimeters on the inside of a cabinet door. The German newspaper did not mention a source of information on its site.

The 26-year-old Palestinian suspect, born in the United Arab Emirates, got into an Edeka settlement in the wild. A customer therefore became injured, seven others injured.

The magazine Der Spiegel reported that the attacker had applied for asylum in Norway but arrived in Germany in 2015. Among the authorities, he was listed as strictly Islamic believer, but not as someone who could have a terrorist act. There are indications that he had psychological problems.