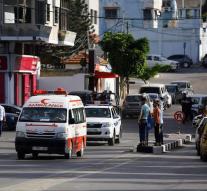 gaza - The ruling Palestinian movement Hamas on Gaza has executed three sentenced Palestinians on Thursday. The three were sentenced because they had killed a high leader of Hamas on behalf of Israel.

The victim was Masen Fukaha, important within the military arm of Hamas. He was shot dead in Gaza at the end of March. Two of the convicted were suspended, the third came for a firepower.

According to Hamas, Israel is behind the murder and handled the three on behalf of that country.