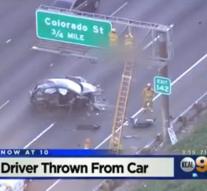 glendale - " Good Halloween joke ! ", Thought this weekend motorists on Interstate 5 near Glendale (California) reason. They looked at about ten meters height are one body on the signage. With Halloween doorstep, most road users could see nothing but a joke with a doll in the run-up to the horror evening. However, the doll turned out to be a real body.

The man who hung over the road was no joker, but an unfortunate victim of a traffic accident. The 20-year-old Richard Pananian drove recklessly around without a seat belt. He collided with a pickup truck and was thrown from his car. Pananian meters flew through the air and landed on the road.

The man sat there for several hours, when the police was informed. " Several people called us to ask if it was a joke ", according to an agent. " But that was not determined. "