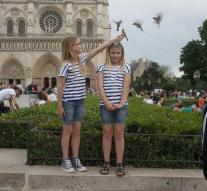 - The number of sparrows in Paris is rapidly deteriorating. In parts of the metropolis is the small brownish bird even almost completely disappeared.

Counts show that the sparrow population has declined by about half in Paris since 2010, say French ornithologists at the news 20 minutes.

The reason is not certain for the relapse. But experts argue that Paris is in increasingly better structural condition. Sparrow loves ruins and old roofs to make nests, but new construction and renovation are there less and less.


Further, the number of insects decreased in the city and wanders less edible garbage around. Some also blame the return of the hawks in the city.

The house sparrow it is difficult elsewhere in Europe. Here and there the bird has been declared a protected species. Also tried with special tiles or houses the animal to provide a good breeding place.