Home / World / Half of the victims Aleppo child 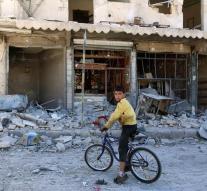 aleppo - Children make up about half of the victims who in recent days have fallen into the rebel-occupied part of Aleppo. That report rescuers working in the heavily bombarded east of the city.

Among the wounded were hospitalized Saturday in the devastated city was 43 percent minority, the medical staff told to charity Save the Children. The ambulance service of the Syrian aid organization Shafak drew the last two days as many children as adults.

Due to the large shortage of medicines, equipment and staff to the field hospitals to injured children often do not save. The patients can not be placed elsewhere, because eastern Aleppo under siege and is sealed off by government forces.

Exhausted rescuers also have to fear for their own lives. Last week became an employee of Shafak seriously injured by an air attack by the Syrian army.