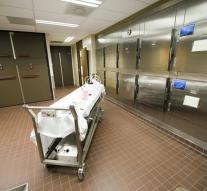 brussels - Approximately 30 to 50 percent of the causes of death to be established in Belgium is incorrect. Which reported the Belgian newspaper De Standaard and Het Laatste Nieuws Saturday authority of pathologists.

Under Belgian law, any physician may determine a cause of death. 'It is not enough to consider only those dead bodies that show external signs of violence,' said forensic pathologist Wim Van de Voorde at The Standard. The pathologists advocate to perform autopsies on all traffic deaths, suicides and sudden deaths. That would still only have happened through their own profession.

Experts estimate that many murders remain undetected due to incorrect autopsy. 'We are the only country in Europe where victims of homicide still fall into the wrong hands. Therefore our country is facing an estimated 150 to 200 undiscovered murders. '