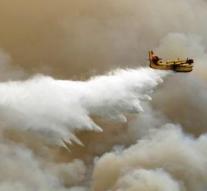 - "The extensive forest fires on the Greek island of Thassos is now almost half the island on fire. Everywhere there is fire in the southern half of Thasos. The blaze was so extensive that firefighters should be limited to preventing the fire also reached the north."

"Hundreds of firefighters are on the Aegean island of Thasos to work. Planes and helicopters are used to pour water on threatened areas onion. Four firefighters have been injured. Also, several residents were injured. Prime Minister Alexis Tsipras will visit the affected island Monday."