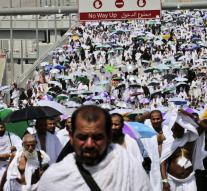 - "One and a half million Muslims are Saturday morning began the ritual hajj in Mecca, under strict precautions. There have been placed cameras everywhere and the pilgrims wear bracelets with GPS so that the authorities can keep track of where it is busiest and possibly warn it might be too busy."

"Last year broke panic in the crowds, which were run around 2000 people under the foot and died. At least, that being the figures. Sunni Saudi Arabia holds it in 769 deaths and lies about it at odds with Shiite Iran. Therefore, this year do not Iranians to join the hajj."