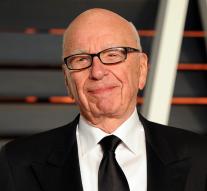 london - British prosecutors take any further action against media group News Corp hacking scandal in which the tabloid News of the World took the cup. According to prosecutors, there is insufficient evidence of the alleged phone hacking by journalists.

Reporters from the tabloid have admitted hacked phones to get information. The bugging caused a scandal when it became known in 2011. Eventually it resulted in the cancellation of News of the World, which was part of the media empire of Rupert Murdoch.

The Office of the Prosecutor announced twelve cases prosecuted, which resulted in nine convictions in the past three years. " After a thorough analysis, we concluded that there is insufficient evidence for convictions and therefore no further action is taken in other cases ", said Alison Saunders Director of Public Prosecutions.