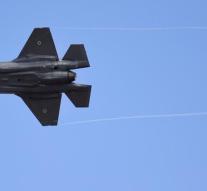 sydney - An attacker stole information about the Joint Strike Fighter program and other military equipment last year by breaking into the computer network of a military army. According to the minister responsible for the Australian defense industry, about 30 gigabytes of data were stolen, including plans for the Joint Strike Fighter and the P-8 Poseidon Reconnaissance Aircraft.

'Fortunately, the files that are included are commercial files and not military data. It's not extremely secret information, 'said Minister Christopher Pyne against Australian news transmitter ABC. During the presentation, it appeared that it involved technical information about smart bombs, the JSF, the Poseidon device and some navy ships. According to the minister, there is no danger to national security by theft.

The ministry has no idea who is behind the cyber attack. The hacker was in the network for five months in 2016 and the method was, according to the Australian security service ASD, 'methodical, slow and well-thought-out. 'According to the authorities, a state may be behind the hack. 'It can be one perpetrator and there may be several,' said Minister Pyne.