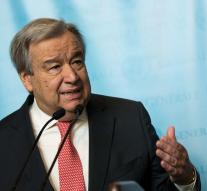 - Antonio Guterres on Monday officially sworn in as the ninth Secretary General of the United Nations. The 67-year-old Portuguese took the oath in front of the 193 members of the General Assembly of the UN in New York. He starts on 1 January.

The former prime minister of Portugal is the successor to the 72-year-old South Korean Ban Ki-moon, who leaves to have functioned after two terms of five years as secretary general. Guterres was except from 1995 to 2002 Prime Minister also United Nations High Commissioner for Refugees of the United Nations from 2005 to 2015. In that role he was the successor of Dutchman Ruud Lubbers.