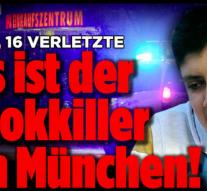 - The shooter Munich bought the gun with which he shot and killed nine people Friday through hidden parts of the Internet, the so-called darknet. That German media reported Sunday. According to the Süddeutsche Zeitung refers to a theater weapon 'that was made again shot skills.

The paper is based on sources close to the investigation. The 9 millimeter Glock 17 dates back to 2014 and had marks from Slovakia.

According to the German newspaper the shooter was still more interested in previous violent than previously thought. So he traveled to the southern German town of Winnenden, where a seventeen year old boy shot and killed fifteen people in 2009. He looked around there and took pictures.

'You would only need to polish'