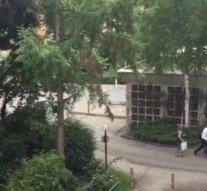 - The perpetrator of the shooting in Munich would have honored an earlier massacre at a German school. It reports the German news agency DPA according to sources within the German security service.

The motive for the shooting Friday, leaving nine people lost their lives, however, is not yet clear. According to information from the security service would be the 18-year-old German Iranian, wildly to have glorified him shot in a shopping center in Munich, the deeds of a 17-year-old boy in Winnenden in 2009. Who shot at his old high school and on his flight together fifteen people dead. The shooter Munich, which in the nineties with his parents came to Germany would have had problems at school.